Why microinverters are a good option for commercial solar projects? 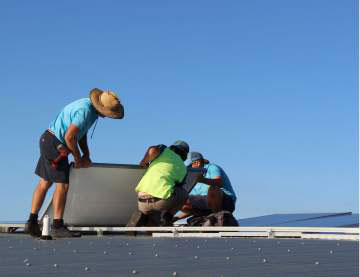 Microinverters have a number of benefits when used in a commercial installation, including increased safety, NEC compliance, comprehensive monitoring, higher energy harvest, and greater reliability than many string inverter options.

Inherent to their design, Microinverters do not require high-voltage DC running across the roof as a string inverter system would. Instead, about 30V DC runs out of the panels into the microinverter and is then converted to AC power-right on the roof. This avoids the very high voltages (600V or higher) that would be running off the roof into a string system. The lower voltages of Microinverters makes the system safer for property owners, emergency responders, and maintenance workers.

2. When the AC utility is not present, the microinverter performs the rapid shutdown function in approximately 100 milliseconds, 100 times faster than the required 10 seconds required per code.

3. Microinverters are installed directly underneath solar modules, so all low voltage < 30VDC wiring is not accessible to the first responders eliminating any hazard.

4. In regards to APsystems Microinverters, there are no DC conductors energized more than 5 feet in length inside a building or more than 10 feet from a PV array.Microinverters comply with the NEC standards by design. Safety codes like NEC 690.12 for rapid shutdown, and 690.11 for arc-fault protection, require quick action to protect first responders in case of a fire – the system must be de-energized within 10 seconds of shutdown under the code. Microinverters actually achieve this much quicker. When AC is not present, the Microinverters will shut down within 100 milliseconds, 100 times faster than the code requires. In the worst case, first responders on a roof with a microinverter system will encounter just 30V DC, which is not considered hazardous – and the Microinverters themselves will be under the modules, further shielding them from inadvertent contact.

Reliability is important for energy harvest. Microinverters are in a unique position in regard to reliability as well. If a microinverter does fail, or has an issue, it’s only one unit out of the entire system, as opposed to a string system in which one failure will take out a whole group of modules. Reliability of the microinverter doesn’t just relate to power production, but also reliability to communicate the production of that power. If a string inverter goes down, it stops communicating information about the system. Whereas Microinverters actually create a “mesh” network; even if one unit is down, they can still talk to the others and pass performance data along back to the controller.

One last important aspect of Microinverters is that most carry a 25-year warranty, as opposed to a typical 10-year warranty from string inverters. Microinverters have proven themselves in many challenging environments and will prove a good choice in commercial-scale projects too.