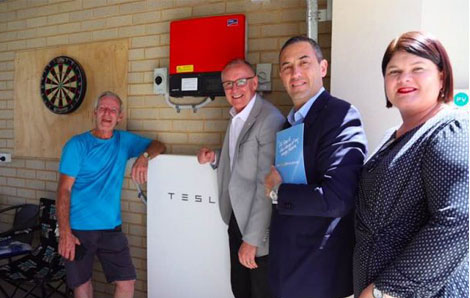 The 250MW Tesla virtual power plant in South Australia unveiled on Sunday by the Weatherill state Labor government was impressive for all sorts of reasons.

Secondly, it accelerates the push towards the future grid, where the market operator, the CSIRO, the networks, and most generators acknowledge will source around half of its electricity needs from local generation, in houses and businesses.

Thirdly, it does this by focusing on the demographic most at risk of missing out on this exciting transition – government-funded social housing, and privately-owned low income and rental housing.

There is no doubt that there is an element of personality (the budding bromance-of-convenience between Weatherill and Tesla’s Elon Musk) and there is politics aplenty.

The announcement came just two weeks before the state election, now a three-way battle between Labor, the Coalition and Nick Xenophon’s SA Best.

Remarkably, this is one area where Labor and the Coalition appear to be in agreement. (SA Best has yet to produce its energy policy).

The state Liberals propose installing battery storage in 40,000 homes, with a “means-tested” grant of around $2,500.

But these batteries won’t be inter-connected to form a virtual power plant, and that won’t remove the problems low income households have of finding any upfront capital.

So, how is this Tesla proposal going to work? Some details are not clear, but here’s an attempt to unravel them:

It will then also be offered to up to 25,000 privately owned low income housing and rental homes.

Housing Estate homes are getting them for “free”. How will private households get them?

The Housing Estate residents will get the 5kW solar system and the 13.5kWh Tesla Powerwall batteries installed for free. This will be funded, initially, by a $2 million grant from the state government and a $30 million loan, and then by the retailer chosen to manage the rollout, and possibly private investors through a special purpose vehicle.

The residents will pay for the use of the solar and battery, around 27c/kWh, which compares to near 40c/kWh for grid based use. It’s not clear how private homes will access the scheme, but are likely to have a choice of doing the same “free install” and paying for output (effectively a lease), or buying outright.

Why aren’t the discounts bigger?

It seems likely that the cost of solar PV and battery storage would be cheaper than 27c/kWh – South Australia Power Networks, for instance, has suggested solar and battery could be as low as 15c/kWh by 2020, but that estimate does not make it clear what size battery.

In any case, like all such “leases”, the organisation paying for the installation is taking the risk and therefore needs a return, so some of that price is the “margin” for investment risk.

Also, it seems that all Housing Estate residents will benefit from the reduced energy cost – particularly those who want the solar and storage but whose premises do not allow it. It’s not yet clear how that works.

Who benefits, and by how much?

The modeling done by Tesla and Frontier Economics suggests a one-third reduction in electricity costs for Housing Estate homes, as mentioned above.

But there are broader benefits for the market, both in being able to provide “back-up” power when needed, reducing grid demand in summer peaks and providing “network security” services through the battery.

Frontier Economics estimates the wholesale price benefits from every 50MW of new independent capacity is around $3/MWh, which means that the Housing Estate component could reduce wholesale prices by around $8/MWh. This will reduce annual consumer bills across the state by around $90 million a year.

Who will install them?

The state government says there will be 250 jobs created for the installation, and up to 260 more jobs through the supply chain, with the government’s contract with Tesla stipulating that local contractors must be used. Tesla will establish a service hub at Tonsley to help manage the VPP and the “big battery” at Hornsdale. The state government will also contribute $1.25 million to help South Australian businesses secure contracts on major renewable energy projects.

Who is managing the scheme?

Tesla will be responsible for the initial roll-out and then it will be the responsibility of the retailer, which will be named after a government tender. The government has said it wants a new retailer in the market, and smaller companies like Powershop have indicated this could provide the opportunity to move into South Australia.

Where will the solar panels and battery storage come from?

The batteries will come from Tesla, as it was their idea (made through a tender conducted by the $150 million Renewable Technology Fund). The solar modules will come from a range of sources, although the state government has declared it wants 50 per cent sourced from Australian manufacturers, which places the Adelaide-based Tindo Solar , the only solar module “manufacturer” in Australia, in prime position.

Who is paying for it?

Investors could be brought in to help fund the roll-out in return for a set return (from the sale of power to the residents).

How will the VPP work?

The full roll-out will create a “viritual power plant” with 250MW of capacity and 650GWh of storage, but it would be wrong to imagine this as a distinct power station that can be suddenly switched on or off at that capacity.

Some part of the capacity will be able to be deployed into the market, while part of the solar output will be supplying the host households, so will contribute by reducing grid demand, particularly in those afternoon peaks.

The protocols of how the battery storage will be deployed (they will be linked through software) have yet to be revealed, and are probably not even decided,

Will consumers get revenue from providing grid services?

Not clear, but probably not. That will likely to go to the investor/retailer as part of their risk/reward for the installation.

What about a feed-in tariff from exports back into the grid?

Again, not yet clear, but probably not, as this will be part of the risk/reward for the investor(s). But given the size of the storage, it will be surprising if exports back into the grid would be significant.

Will their air-con be switched off at times of peak demand, when it gets really hot?

A favourite meme of the 4M crowd (Murdoch Media Mischief Makers). But no. A portion of the battery could be secured. And if really hot, the rooftop system is likely to be generating solar. In any case, it will act like a demand response scheme, when such “load shedding” is voluntary.